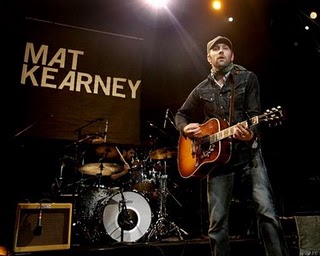 After hit single and title track from 2006’s album, Nothing Left to Lose took off, Mat Kearney found himself on the road continuously. Supporting acts like John Mayer, Sheryl Crow and The Fray as well as his own headline stints, Kearney has been making a name for himself ever since.

Three years and many traveled miles later, Kearney is back with City of Black & White, due to hit shelves May 19. Of his release, Kearney has said it is a record about community. “There’s definitely the theme of this traveling/sojourner/vagabond kind of guy landing in the midst of people that he loves, and who love him.”

Kearney has said he listened to U2 and Tom Petty while recording the album and this influence can be heard on many tracks. Additionally, “New York to California” strikingly evokes early Coldplay, specifically Chris Martin’s vocals and piano accompaniment throughout hit single “Clocks.”

Slower ballad “Never Be Ready” recalls Kearney’s radio hit “Nothing Left to Lose” with its catchy chorus and slow buildup throughout the song while “Lifeline” portrays longing, specifically in lyrics, “The world is too big to never ask why/The answers fall straight out of the sky . . . I can’t feel a thing without you by my side/Send me out a lifeline.” At times his voice sounds saddened, as he pours all his emotion into each song.

While there isn’t tremendous variation from track to track, Kearney’s relaxed and familiar vocals are what keep the listener intrigued. Emotional song, “Annie” encompasses a moving tale of a girl needing to break free of her mundane life. A relatable track, the listener can sense the passion and heartbreak felt within each line of the song.

City of Black & White is bound to continue Kearney’s musical success. Pick up a copy May 19th and be sure to catch him live, currently on tour with Keane! Listen to a preview of some songs off his upcoming release on MySpace.

Recommended: For fans of Coldplay, John Mayer, U2 and The Fray.

He’s one of my favs! I saw him in concert a few years ago and I was so impressed. I can’t wait to listen to his new album. The cover art looks really nice.

The album is so great! Have you listened yet? Definitely one of my favorites from 2009 so far.