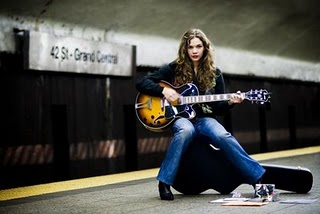 While she’s been getting quite a buzz lately, both from her album release and frequent underground performances in NYC’s subways, Natalie Gelman is one musician to keep on your radar. Having been compared to Sheryl Crow, Tori Amos and Jewel with her emotion-filled rock, Gelman remains to set herself apart.

Not your typical everyday singer-songwriter, Gelman vowed to complete an entire 1500 mile tour from Miami, Florida to New York City on rollerblades while performing in venues along the way — all while selling her self-titled debut album and donating the proceeds to Children International. An impressive feat, Gelman survived many obstacles throughout this journey including being hit by cars twice on the tour.

From the saddened heartbreak displayed throughout “Leave” to the struggle of dealing with failure in “Run Away” the listener hears the deep and honest emotion throughout Gelman’s music, begging for more. The string feature encompassing “Forgive Me” is remarkably fitting and leaves a lasting impression to the fade out of the song. Each track is as if reading a diary entry, so listen and decipher for yourself.

Learn more about Natalie below in her YouTube video. You can watch as she discusses the start of her NYC subway performances and see her live in action!

For more on Natalie, be sure to visit MySpace and her Web site

3 replies on “Artist of the Week: Natalie Gelman”

You mentioned her on your Twitter page and I checked her out on MySpace. Good music! Thanks for the suggestion.

No problem! Glad you liked her music 🙂