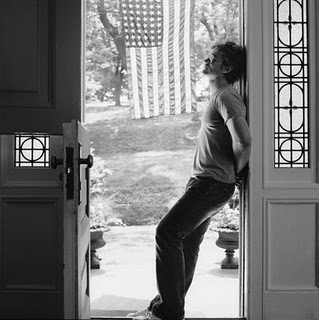 I received an email recommendation a few weeks ago from fellow blogger Suze (you can read her blog, My Life is Like a Song here) suggesting singer-songwriter Griffin House. While the name sounded familiar, her and I both couldn’t remember if I blogged about him in the past. After doing a quick search I realized I hadn’t, and proceeded to listen to his music.

His voice sounded so familiar that I’m sure I’ve stumbled upon his music before, whether it be on another blog, in a movie or perhaps a television commercial. The first song on Griffin House’s MySpace page is “The Guy That Says Goodbye” (see video below) and right away pulls at your heartstrings. The light guitar strumming combined with gentle strokes of piano peaked my interest and the emotional lyrics only left me more intrigued. The sincerity he puts forth is inspiring.

“You don’t need to change a thing about you babe/I’m telling you from where I sit you’re one of a kind/Relationships I don’t know why they never work out and they make you cry/But the guy that says goodbye to you is out of his mind,” House sings throughout the chorus.

I thought “The Guy That Says Goodbye” would be my favorite, but each song gets better and better. The honesty and pure beauty of his lyrics move the listener and House’s talent is undeniable.

With lines like “You hold my hand and it’s better than love” in “Better Than Love” and the older, laid-back country vibe of “Live To Be Free,” each song is a new surprise. “Never Again” brings forth his brutal honesty when singing, “Never again am I gonna give my heart to a bullshit cause/I’ve had enough of lies and dark/Never again am I gonna waste my time on a bullshit road/It’s never been a friend of mine/Simple words from a simple man/Take me as I am ‘cause there’s no guarantee I’ll ever change.”

My recommendation: Listen to the lyrics closely or play the song while reading along word for word on MySpace.

Griffin House’s bio states that he wrote his first song for his high school sweetheart with whom he’d parted ways after graduation. When she came for a visit House played it for her and it brought her to tears. “Then I was hooked,” he said, “I thought, ‘Oh, man, if I can make people cry, I’m gonna keep doing this. I’m gonna make as many people cry as I can!'” After laughing at the memory, he put the experience in perspective: “What I was drawn to was the power of the song, how it could affect people emotionally.”

I believe it. Having continually refreshed his MySpace page after listening to the six-song selection, the emotion heard throughout each song never falters. Griffin House is well on his way. For the latest on Griffin, be sure to visit his Web site or listen to him on MySpace. You can watch the video for single, “The Guy That Says Goodbye” below.

2 replies on “Artist of the Week: Griffin House”

This is exactly why I gave you the heads-up. I already loved him and your write-up gives me more reason to love him (and makes me want to listen more).

You write, I read! (and listen)
P.S. thanks for the shout-out…it was very thoughtful.

No problem! I can’t stop listening to him! I really should look into setting up an interview or catching a show when he’s in town 🙂 Thanks again for the tip!