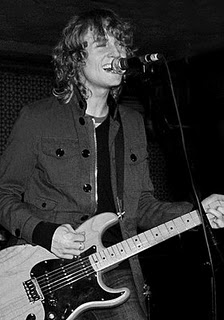 Taking the stage solo, Army of Me frontman Vince Scheuerman played to a standing room only crowd Wednesday night at the Living Room.

For me, life came full circle as I realized that it was just around this time last year that I first met Vince for Army of Me’s show at Union Hall in Brooklyn. My third “official” band interview for the blog, I remember walking away in awe of the pure honesty and amount that he revealed himself to me, a mere music journalist. Then I was struck with the immediate, “I HAVE to do this for the rest of my life” realization.

A few months later I was fortunate enough to go on tour with the band during the “Get a Life” tour with The Used, Straylight Run, Street Drum Corps and Lights Resolve — all great bands you should definitely check out if you haven’t yet. I spent two days touring with Army of Me; interviewing the guys and getting a feel for the real touring lifestyle. Let me tell you, it’s not as glamorous as it may seem.

Wednesday night at the Living Room, Vince reminded me of why small venues are my favorite. The intimacy. The onstage banter. The feeling that you’re having a conversation with the musician onstage.

Performing songs from Army of Me’s amazing debut album, Citizen (pick it up on iTunes, easily my most listened to album of the year) as well as a few new songs, Vince showed the audience his true colors as he told many of the stories behind his songs. Take “Perfect,” a solid song played on acoustic guitar of which he said was written “at the end of a six-year relationship where I realized I was the worst boyfriend ever and was so wrapped up with myself.” With light guitar picking, never overpowering the emotion of the song, Vince had the room paying attention to every lyric sung.

Having been off tour for a few months, Vince told the audience he’s been at home writing and debuted a few new numbers. Some still untitled, he told the room his tentative song titles throughout the night. Not a huge deviation from his debut album, the newer songs sounded a bit more personal and fit the acoustic, intimate atmosphere of the venue extremely well.

Heading over to the piano, he told the crowd, “If I had my way, I’d play piano 80% of the time and guitar 20% of the time. But, I’m not good at piano,” which seemingly presents a problem in that wish. Despite his lack of confidence in his piano playing, piano based “Better Run” continues to be my favorite song of theirs played live. Slowing down the night, you can feel the emotion throughout the lyrics as Vince sings, “If you find that your life would be better off without me/If you’re running full speed and it feels good to be free/If you know it in your soul, though it’s hard to let it go/You better run, you better run.”

Another song from Citizen, “2 into 1” he asked, “If you love someone, is there anything you can’t forgive?” before telling the crowd, “That’s the idea of this song.” The rest of the night included more of a behind-the-scenes look at each song performed as well as a few personalized dedications to long-time fans in the crowd.

As the year draws to a close, Wednesday night’s set reminded me of why I began this blog just over a year ago. Showcasing musicians like Vince that I probably would never have stumbled upon years ago and seeing their progress as a band over the years is so inspiring. I’m excited to see where Vince and the rest of the guys from Army of Me will be up to in the next few years!

Vince will be playing another acoustic set in Arlington, Virginia this Thursday, so if you’re in the area be sure to catch it! For more on Army of Me and future tour dates, check out their MySpace. And, if you haven’t read my interview with Vince from last year yet, click here.