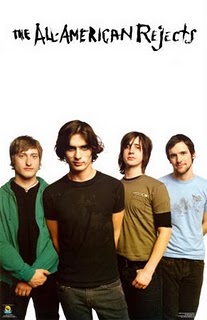 Last night’s free All-American Rejects concert at Hammerstein Ballroom reminded me of my on the fly interview with frontman Tyson Ritter back in college. It was one of those situations that I look back at and laugh because sometimes I can’t believe half the things I’ve done to score an interview with some of my favorite bands. (Please, no groupie remarks I’m a journalist not a bandaid!) Anyway, last night’s show was pretty intimate as they were filming it for Wal-mart and it looked as if only a hundred or so fans gained access to the event. I’ll let you know when I find out the full details of when the concert will air. In the meantime, read below for this week’s “Blast From the Past” with the All-American Rejects.

When my friend invited me along to help cover a concert at the Sovereign Bank Arena in Trenton two summers ago, naturally I went. She was working on a piece for the Trenton Times about the venue and how it was trying to attract a younger crowd. Hence, the concert “Popfest” was put on by local radio station WPST 94.5 attracting many of its younger listeners. In addition to the All-American Rejects, performers included Nick Lachey, The Fray, Bo Bice, and The Click Five.

My friend was promised a press pass to interview some of the bands, but for some reason it fell through. This is where my ingenious Plan B came in. “Let’s just go find their tour buses,” I remember telling her matter-of-factly. And so we did. After waiting 10 minutes or so she was discouraged and wanted to leave, but I persisted. A few minutes later, drummer Chris came out of the venue but was short on time, so he told us to wait for the rest of the guys. Shortly after Tyson approached the bus where we were able to ask him a few questions about the event. It was probably less than a five-minute impromptu interview, but I’ll take what I can get!

Do you enjoy playing shows like Bamboozle more?
Oh yeah. That’s like the voice of a generation all in one spot at the same time. They’re the future leaders of . Even though they may listen to music that’s not contemporary or run of the mill, those people are a lot different when they go to Bamboozle. The people who go to Bamboozle are definitely . . . I don’t know, more cerebral than normal people, I find. Whereas at these shows people scream and go crazy like five seconds after they see us. At Bamboozle a kid will be like “What’s up Tyson?” and try to talk to you, as opposed to try to bombard you or scream until you give into some weird wish that they want. But it’s all fun.

Gotta love the honesty. Be sure to pick up a copy of AAR’s new album when it hits stores, December 16.