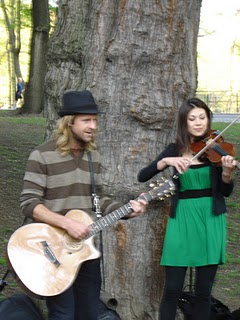 Working and interning in NYC has it’s pros and cons, but that’s an entirely different post in itself. Today was definitely one of the perks of working in NYC, being that Switchfoot’s Jon Foreman had an impromptu performance in Central Park. Lucky for me, it was a few blocks from my internship so I took a late lunch to check it out and decided I had enough time to go back and finish what I was working on before Jon showed up to perform. A little advice for non-New Yorkers . . . don’t try to catch a cab at 5:30 on 6th Avenue, it’s nearly impossible. After many failed attempts I noticed one of those bicycle drawn carriages (is there a proper name for them?) so yes, I felt like a tourist trying to get to 65th Street and Central Park West in one of those, but hey, I got there in time to catch a few songs so it all worked out!

I arrived shortly before 6 p.m. as Jon was just finishing up “Let Your Love Be Strong” on guitar with violin and cello accompaniment. He then went into “Your Love Is Strong” from his most recent EP – Spring – and the “part two” of his previous song. About 50 or so fans and New Yorkers passing through Central Park surrounded Jon under a giant oak tree, just sitting on the ground listening and taking pictures. At times, it was somewhat reminiscent of sitting around a campfire and requesting songs to sing along with him. In fact, I think that’s what he wanted as right after he sang “The Cure For Pain” from Fall he said, “Let’s play a song everyone knows” as he began “Dare You To Move” – a song he said he wrote while living in his parent’s house. 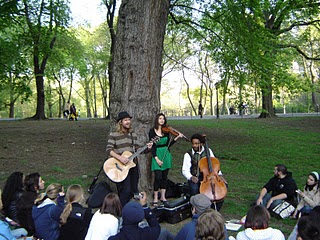 Although it was hard to see what the crowd favorite was, almost everyone could be heard singing along to “Dare You To Move” and the next song, the infamous “Only Hope” from 2002’s hit film A Walk To Remember. Jon finished his Central Park set with “Learning To Die.” He prefaced the song by explaining that he used to think death was an inconvenience and how our culture verges on us thinking we’re invincible. However, after experiencing death he realized that “we’re all apt to it. It’s a startling realization that life is not about the understanding of living, but how to learn about dying and having to give yourself away.” 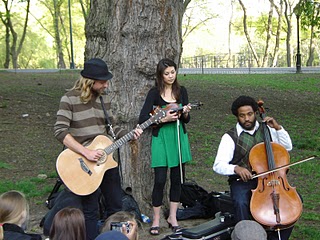 After his set, as all of the Switchfoot shows I’ve been to, Jon took pictures and signed autographs for his fans. The last segment of his four season EP’s is due out June 10. Be sure to check out his MySpace for some songs from his Spring EP and check back next week for a concert review from Switchfoot’s upcoming show Saturday, May 3 at Rutgers!

This is such an amazing post. It’s these types of moments that make my heart melt working in NY. I was just thinking about all the talent I see just passing by the streets and in the small clubs in NY. But being able to go see a known band in the park a few blocks from your job is priceless…and only in NY.

P.S. I love that you rode the touristy bicycle thingy. I don’t know what it’s called either.