Silver lights and snowflake decorations dangled from the ceiling of the lower level of The Delancey as an eager crowd gathered Wednesday for a night of live music, drink specials, giveaways and raffles. Candy canes could be found on tables for guests while candles dimly lit the room, giving it a comfortable ambiance where friends and musicians came together for the release of A Family Holiday – a holiday album where all proceeds are donated to 826NYC – a nonprofit organization dedicated to supporting students ages 6-18 with their creative and expository writing skills.

Nearly a year in the making, singer/songwriter Benjamin Wagner explained how every year he releases a Christmas song on his website. Inspired by the 1984 Band Aid song, “Do They Know It’s Christmas?” featuring Sting, Bono, Duran Duran, Paul Young among others who helped out and contributed to the track, all to raise money for famine relief in Ethiopia. A few years later, holiday album A Very Special Christmas was released, again raising money, this time for the Special Olympics, where well known musicians, including U2, Sting, and Run-D.M.C. as well as many others had a track featured on the album.

Wagner explained that the song, “Do They Know It’s Christmas?” had all his favorite singers on it. “Its not the greatest song on the planet, but at the time no one had ever done that before,” he said. The idea and concept to release a song solely for charity was unheard of until then.

“I thought I’d get Casey, Chris Abad and Jeff Jacobson together to record “Do They Know It’s Christmas” and play it on my website and was like wait, that’s not big enough lets raise some money,” Wagner said. “Along the way I was like, why don’t we get everyone to chip in and do their own songs? Instead of A-list artists, its my friends. They’re A-list in my heart.”

Fast forward to Wednesday night at The Delancey, a joint concert/album release party where many of the artists showcased on A Family Holiday performed a few songs of their own. Kailin Garrity started the night off with her track on the album, “Silent Night.” A beautiful version with her soft vocals and guitar accentuating the song well.

Jeff Jacobson was up next, performing his song on the album, “Frosty the Snowman.” Definitely a new take on the holiday classic, but very enjoyable. Other performances included El Jezel’s take on “Working on Christmas” as well as Wakey! Wakey!, Wynn Walent and Seth Kallen performing his rock version of “Dreidel 2.0.”

Jennifer Snow, representative of 826NYC explained that the basic premise of the organization is that writing is important, including songwriting.

The Flying Machines definitely brought a lot of energy throughout the room during their set. They had some strong guitar riffs during their performance and had the crowd screaming to “Right Around Christmas” during the well-played keyboarding and guitar intro. 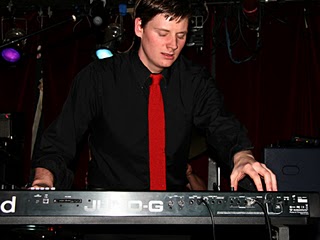 Chris Abad also had a lot of energy, keeping the crowd lively throughout his set. I unfortunately missed the last act – Benjamin Wagner and his band. Being a Jersey girl and having to catch the last bus home at 11:15 is extremely frustrating at times, but lucky for me I bought the album and he filled me in on what I missed – a few of his songs, including his track on the album, “Christmas (Baby Please Come Home)” and the joint track with all the artists performing “Do They Know It’s Christmas.”

Wagner explained that he was trying to provide a “think globally, act locally” concept, which is the idea he pitched to his fellow musician friends back in August. They all saw his vision and got together and recorded the album in November, which includes everyone performing “Do They Know It’s Christmas” together, as well as contributing one track from each artist. 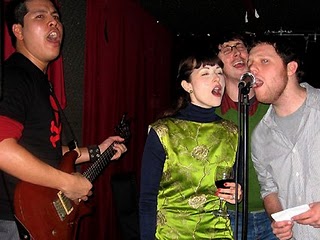 “I was trying to make the idea that we are all stronger when we work together. Everything is better when you do it with somebody else’s help. I could do something myself, but it would be 15 times better if I got 15 other people together. The whole point is to do something bigger,” Wagner said.

As for the choice of album proceeds going to benefit 826NYC, Wagner explained that he is a big admirer of writer Dave Eggers, especially his memoir, A Heartbreaking Work of Staggering Genius. With the money Eggers earned from auctioning his memoir into becoming a film he started the youth literacy drop-in tutoring centers in Berkeley, Chicago and New York, eventually expanding to various locations throughout the nation.

While currently having broke even from the production costs of the album, Wagner said his hopes are to raise $1,000-$2,000 for 826NYC.

Albums can be purchased on the MySpace site, http://www.myspace.com/afamilyholidaybenefit.